skip to main | skip to sidebar

Move over Edie....make way for Cindy! 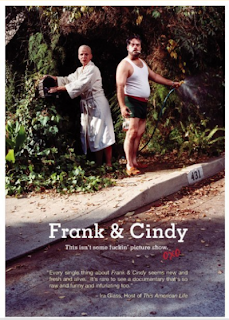 All right, I'll be the first to admit that I'm a huge fan of Grey Gardens....but, at this point who isn't? I'll also admit that I'm generally opposed to anything that is too au courant (a thousand pardons if I didn't use that phrase correctly). Having admitted this, I shutter to divulge this morsel of scrumptious pop culture. But, as penance for having taken such a long sabbatical from posting I share with you Frank & Cindy.

It's a timeless tale of a cracked out mom, who is hilarious in a sad and endearing way, abandoning her young son to run off with some guy who was apparently in a band, OXO, that may have had one hit in the early 80's. The son, G.J. Echternkamp, grows up to be a dapper young filmmaker. He's made quite a bit of films in his 30 years, 14-ish, but Frank & Cindy is by far his most popular to date. Now, I'd like to preface my humble review by saying that I'm a relatively cynical guy. But, I couldn't help but notice a much too similar, and somewhat formulaic, approach to the direction of this documentary. It felt almost like volume three of Grey Gardens. G.J. Echternkamp's style seemed to me to mirror that of the Maysles. How does that phrase go, "if it ain't broke don't fix it".

Regardless of my opinion, I encourage everyone to watch this film. I'm sure that i'll watch it many more times, and I'll tell many people about it. It's somewhat refreshing to feel that you've discovered something at the cusp of it's mass popularity. Bravo Mr. Echternkamp!
Posted by Scott Fazzini at 6:28 PM

this sounds terrific. i'm gonna try and netflix this!

I recently came accross your blog and have been reading along. I thought I would leave my first comment. I dont know what to say except that I have enjoyed reading. Nice blog. I will keep visiting this blog very often.

I think I need this.

You do! It's fantastic! You can find some clips on YouTube. Enjoy!

nice! never heard of this film, but dont see it on netflix. how did you see it?

I love Grey Garden but I haven't seen this film yet. So, I shall put this one on my list of things to watch. Thanks for recommending unusual films. I love that!

Thank you from me as well. I look forward to checking out this film. I love to support the underdog. Thank you for commenting on my blog. I appreciate it & look forward reading along on Atelier 2119!

Scott, I must watch this film, I really don't know where my precious time goes!. Love your site,

I'm intrigued now!
Simply must put it on my list~

These are a few of my favorite spots

Scott Fazzini
Interior designer by education, window dresser by trade. Contact me for information about design services, and to see my portfolio.